The Foil weighs just a few grams more than Scott's flagship Addict road bike and includes some of that bike's best features. But lessons learned from the Plasma 3 time trial machine have resulted in a claimed 20 percent reduction in drag compared to the Addict...

All the tubes are partial aerofoil shaped (ie. without the trailing edge) at a 2:3 ratio (depth:width) – well within the UCI's 3:1 rule – and similar in principle (but not the same) as the Kamm tail profiles used by Trek in their Speed Concept time trial frame. Truncating the tube profile at the rear forces the air flow to separate at the trailing edge, creating a larger virtual aerofoil and lowering drag compared to a 3:1 profile tube.

The tube designs have been applied to the tapered head tube, fork and bottom bracket area to ensure that air flows smoothly along the length of the bike. The seatstays are widened and shaped to hide the rear brake.

Scott's wind tunnel data suggests an average rider putting out 290 watts will achieve an extra 0.7kph on this bike (an increase from 39.3kph to 40kph). That's a saving of 1.6 seconds per kilometre, or 15 watts.

Aerodynamic performance hasn't been achieved at the expense of other areas, though. Scott say the Foil is actually stiffer laterally than the Addict, resulting in improved power transfer, while retaining enough vertical flex to remain comfortable.

Made of Scott's HMX NET carbon fibre, claimed weight for the frame is just 840g (medium), with the frameset (frame, fork, seatpost and clamp) coming in at 1,227g – five percent heavier than the Addict. Four complete bikes are currently available.

The top-end Foil Premium with Shimano's Dura-Ace Di2 electronic groupset will set you back €9,500 (approx £8,500) but a more realistically-priced, Ultegra-based build with a frame made from lower grade HMF NET carbon is available for €6,000 less (Foil R2, €3,200/£2,850). An entry-level model is due to launch later in the year.

In 2013 Scott knocked it out of the park with their revamp of the Scale RC hardtail, bringing its frame weight down to 899g, and also building a 29in version that weighs just 50g more. For 2012, they offer a remake of the Spark full-suspension race bike that looks similarly promising.

While low weight was of utmost importance for the hardtail, the full-suspension bikes benefit from improved suspension performance and added adjustability, while maintaining their already light weights — 1,790g (claimed) for the 26in version and 1,890g for the 29er (these weights are presumably for the medium sizes with shock).

Scott have focused on suspension travel and the quality of it for the new models, which are maintained as linkage operated single pivots. The 26in model bumps up to 120mm (5in) of travel, while the 29in version offers 100mm (4in). Both feature Scott’s trademark TwinLoc remote lockout. This carries over from their all-mountain and trail bikes, and offers three distinct modes of travel and damping characteristics that operate via a single handlebar mounted lever. The 26in bike offers lockout, an 85mm Traction mode and 120mm open mode, while the 29in version offers lockout, 70mm Traction and 100mm open.

Along with the increase in travel and new TwinLoc remote, the Spark features a new shock called the Nude 2, which is made by DT Swiss, as with the original Nude, and weighs a claimed 220g. This offers a more progressive shock curve (with more ramp-up), and the bike has a lower shock ratio (wheel travel to shock stroke), too — 2.4 for the 26in model and 2.6 for the 29in version. This is said to offer more control; for reference the old Nude shock offered a ratio of 2.9.

Scott say the Nude 2 doesn’t reach full travel until 1,100 Newton of force is applied, whereas the Nude 1 bottoms-out with 900N. The new damping curve was arrived at after engineers studied riders on the old damper. “We simulated a rider’s pedaling and jerky motions made to clear obstacles, and measured their influence on the suspension,” say Scott on their new Spark micro site. “Many other designs assume that a rider is static and coasting, or they only include acceleration forces on the suspension and drivetrain. We're more concentrated on suspending the movement of the rider instead of negating pedaling forces.”

While Scott have worked closely with DT Swiss on the rear shock, it's RockShox they've worked with up front: the Spark's fork features a 2012 RTC3 DNA damper that's been adapted to be remotely operated by the same TwinLoc remote that works the Nude 2. While the adjustment doesn’t change the travel of the fork, as it does the rear of the bike, it selects between its three modes — lockout, platform and open — to best match the position of the rear of the bike. A testament to the truly progressive design of the new Spark is the frame’s adjustable geometry via a shock mount chip, which offers a half-degree head angle adjustment and 7mm of bottom bracket height adjustment.

If you paid attention to last year’s redesign of the Scale you’ll have a good idea of what Scott have designed into the frame to avoid adding weight to this new longer-travel platform, which is also said to be stiffer and stronger. The front triangle uses the IMP 5 molding process, which molds five main pieces together. This includes the top tube shock mount, a tapered head tube with molded bearing seats, internal cable routing and all-carbon press-fit 92 bottom bracket shell, all of which shave weight and add stiffness.

The lower main pivot is wider and built to accept the same oversized axle, hardware and bearings as found on the Genius LT, although they're placed outboard in the stay rather than in the pivot. The chainstays are molded as one piece, including the all-carbon direct-post-mount brake tab and Scott’s IDS SL carbon dropouts (we’re guessing Integrated Dropout System), which support 142x12mm and 135x12mm through-axles, and 9mm quick-release standards.

The seatstays are also molded as a single piece and feature an additional in-molded bridge, which resides just behind the seat tube of the assembled frame. Finally, the shock swing link, called the U-Mono Link, is made from a single forged piece as opposed to the previous two-piece — plus axles — design. It's said to be both narrower, for leg clearance, and stiffer.

Scott are offering three complete Spark models, surely with more to come as the tradeshows draw near: the Spark RC, Spark 29 RC and Contessa Spark RC. All three will sit at the top of their respective lines, with the Spark RC and 29 RC decked in SRAM XX and other top-end components. and molded from Scott’s highest level HMX carbon fiber. Both models forgo 2011’s spec of carbon wheels and DT Swiss fork, which represents the only hope of seeing a price decrease for 2012. While Scott have yet to release pricing for the new models, the 2011 Spark RC costs US$8,799.99

The women's Contessa model features the same frame design, but made with HMF fibers. It’s outfitted with the same dampers but a more reasonably priced Shimano XT group and components that reflect a similar second-tier position. Weights, aside from the frames, aren’t offered for the two top RC models, but Scott claim the complete Contessa Spark RC model to be just over 24lb without pedals.

The TwinLoc pulls two cables at once, offering control over the front and rear dampers at the same time

The IDS SL dropouts are molded from carbon and accept all of the current trail-type through-axle standards, in addition to a standard 9mm quick-release skewer 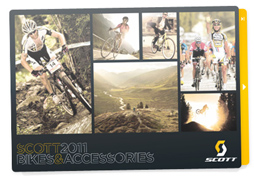